He chose San Saba because of Tommy Lee Jones. Two hours from their home in San Antonio, the place was a far enough drive to feel like a vacation. He pulled up the town’s website on his phone and showed Colleen, his wife, the images—a street lined with old-fashioned brick and stone buildings, pecan trees, a bridge over the Colorado river.

“The hotel has a special rate for weekdays,” he said. “And there’s a winery nearby.”

They couldn’t afford much more than that, Dennis Hardy had lost his job right after Christmas. Five months with no prospects, he took a part-time position at a local hardware store and Colleen postponed retiring from her job as a teacher.

“Tommy Lee Jones was born there. He has a ranch somewhere close by the town.” Dennis knew that Colleen loved Tommy Lee, she had all his movies on DVD. “Maybe we will run into him at the grocery store," he said.

They arrived at the hotel in the evening, after stopping for a quick dinner along the way. The place had a keypad and no staff on duty. It was one of those boutique venues, four rooms above a coffee shop. Remodeled from an office building or a bank, Dennis couldn’t remember. They entered a code at the door and then toted their luggage upstairs.

Their footsteps echoed in the empty hallway to their room. The place smelled of lemon polish and coffee. A black-and-white photo of a cowboy-hatted Tommy Lee Jones hung on the wall outside their door. The room was small and comfortable, with a television suspended from the wall opposite a king-sized bed fitted with smooth cotton sheets. Someone had placed a packet of cinnamon covered pecans on each pillow.

After they unpacked, Colleen gathered her purse and stepped to the door. “I’ll be right back,” she said.

Dennis wandered the room. He inspected the stack of white towels in the bathroom, sat in the leather armchair next to the window, and opened the drawers on the night stand. He found a bible and a folder listing the television channels. The window in their room looked out over the main street of the town. Dennis tugged aside the heavy drape covering the glass and peered out at the street. Empty of traffic, the road looked as he imagined it had forty years past. The lone stoplight blinked a yellow warning at the cross street below. A flash of light over the horizon drew his eye, and he wondered if it had been a falling star.

Finally, he brushed his teeth and undressed for bed. When Colleen returned, he caught the stink of cigarette smoke on her clothes.

The next day they toured the town, stopping in at the winery and purchasing two bottles—one red and one white. They bought pecans and coffee at a shop off the main street, then stopped to shop at the western store across from the hotel.

“If Tommy Lee Jones is anywhere near, I’d expect to find him here,” Colleen said. Surrounded by the scent of leather, they strolled past a legion of boots in every hide from armadillo to ostrich. They climbed a set of wooden stairs to browse the hats, and Colleen picked out a straw one with a curled brim. “What do you think?” she asked as she settled the hat on her head.

“We should get it,” Dennis answered. He did not look at the price tag.

When the clerk rang it up and told him the total, he glanced over at Colleen. She’d wandered off to flip through a rack of western shirts.

“Cash or credit?” the clerk asked.

“Credit.” Dennis handed her the card and held his breath until the receipt printed.

They had pizza for dinner, sitting opposite each other in a booth with cracked vinyl seats. Flies buzzed in the window next to them. While they ate, Dennis stared at a poster on the wall behind the cash register–Tommy Lee Jones from the movie Men in Black.

“It’s nice out,” Dennis said after their meal. “I spotted a nature park on the map, why don’t we go for a stroll?”

“As long as we’re back to the hotel by dark. I don’t want to get eaten alive by mosquitoes.”

At the entrance to the park, they studied the laminated map displayed beside the trail.

“It looks like a loop,” Colleen said as she traced the route with her finger. She wore the straw cowboy hat they’d purchased earlier. The brim cast a shadow across her face.

“I’d like to get some photos along the river,” Dennis said. He held up his camera. “Smile,” he told Colleen, and she laughed as he snapped the picture. The digital screen flashed a preview of the image. Her eyes were closed, her mouth stretched open. Dennis thought to ask her to pose again, but she had already wandered past, down the trail.

The late day sun lit up the grass in golden light, and they followed the concrete trail along the San Saba river. It wove through groves of pecan trees, beside and across the clear stream running through the park. The murmur and burble of the water rose and faded as they ambled along the walkway.

“I think we’re the only ones here,” Colleen leaned close to whisper to him.

Then he heard the chatter of voices and high-pitched laughter, as though the people had been hiding all along. The noise issued from the trees on the other side of a fork in the pathway. A trio appeared from around a shrub-lined corner, a man and two women. They wore an odd assortment of clothing. The man was dressed in white scrub pants, and top, like a hospital orderly might wear. Dingy yellow and rust-colored stains spotted the cloth. The women had on long skirts with torn hems hovering above their ankles. Each woman sported long ropes of beaded necklaces. All three were barefoot, the soles of their feet crusted with dirt.

Dennis placed a hand on Colleen’s arm and drew her away before the strangers reached them. “Let’s go this way,” he said, and they turned their backs on the group.

They passed across a small bridge over a stream, and hiked past tall pecan trees ringing a clearing. Cicadas sang in the trees, their buzzing like tiny chain saws, rising and falling in waves of noise.

“Didn’t we see that tree before?” Colleen asked. “I think we’re turned around.”

“Did you bring a flashlight?”

Together they made another loop of the clearing. They tried yet another path that branched off the main trail, but that one also circled back to where they had started. As the sun set, their shadows lengthened, colors dulled and turned gray. Fireflies flashed in the dark space of the underbrush.

They passed a bench, and Colleen slumped down onto the wooden seat. “I’ll wait here, you see if you can find a map, or at least a trail we haven’t walked before.”

“Don’t move from here. I’ll just go around this loop again, there must be a marker for the way back to the parking lot.”

Dennis used the flashlight app on his phone to light the walkway until the battery showed a red warning. He spun, taking in the twists of tree limbs and trying to commit the shapes to memory. A short way from the bench he found a straight trail. “I’ll just follow this, then turn around and come straight back,” he thought.

He’d walked a fair bit in the dark, shuffling along and trying to spot a place where the path might split, when he realized he’d left the concrete path. Instead of smooth pavement, he walked across loose gravel and bare dirt. A white frame house came into view, bordered by a rail fence.

Dennis turned to head back the way he’d come. He froze, squinting into the gloom. Ahead of him, ambling along the nature trail, were three deer, a stag and two does. One of them, the stag, raised his head and shook his antlers at Dennis. The deer huffed - a coarse, groaning sound like some monster from a nightmare. The does stared at Dennis. Their ears twitched, and they tilted their heads as though trying to figure out why he was out there, in the dark under the trees.

“Well, hello,” Dennis whispered. A crazy thought occurred to him, that these three were the three strangers they’d seen on the trail earlier, transformed by magic from human to animal form.

One by one the deer pivoted, turning their backs on Dennis as they moved away. One of the female deer peered over her shoulder at him, checking to see if he would follow them. He did, sneaking behind them and readying himself to run if the stag charged.

Together they passed the empty bench where Colleen had sat. The deer wandered into the grove of trees to graze on pecans fallen amongst the leaves.

“Colleen!” Dennis called. The deer started, does and stag darting into the brush. Silence descended.

“Colleen?” Dennis called again, quieter. He wondered if the three strangers had passed by the bench. Maybe they had kidnapped his wife. Or maybe they had merely led her out of the park. Dennis decided he would try the smaller loop again and hope it led back to the main trail.

As he moved, the dark enfolded him. He did not call out again, something within him reluctant to break the stillness. The path straightened, and he crossed the little bridge over the stream, the one they’d walked across earlier. He continued forward until the trees thinned and he could see the lights in the parking lot at the entrance to the trail.

Dennis emerged from the woods and spotted Colleen leaned against the side of their parked car, a cigarette in her hand. She drew it to her mouth and inhaled, the orange ember at the tip flaring like a tiny sun, like a falling star. 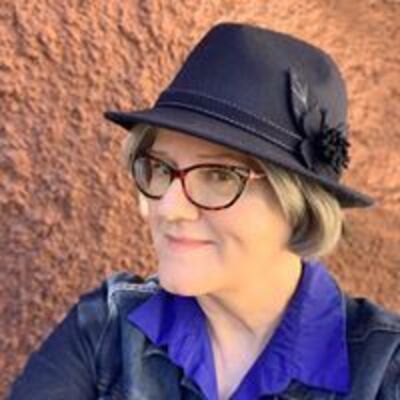 The opening line got me, something about its originality. Why anyone would choose anywhere because of Tommy Lee Jones beats me, but that's why I wanted to read on!

Thanks for your comments, I'm glad you like the story.