Submitted for Contest #24 in response to: Write a sweeping romantic tale of two lovers who must overcome the horror of being hunted by an unseen foe.... view prompt

It’s hard to say when I first noticed, but it must have been there, always.

It must have watched when I was first brought home, swaddled in blankets, when our parents got together and left us lying side by side in the cot. It was there as we cried and as we laughed; as we took our first steps.

It was there when I pulled on my welly boots, yellow with duck faces, yours red like the fallen leaves, and we ran outside to jump in as many puddles as we could find. We streaked mud on our faces like war paint and played until you had to go home, then you pulled the twigs loose from my hair. I was too excited to sleep so instead, I watched the minute hand dragging so slowly around the clock, waiting to see you again.

Snow froze the ground, snowflakes catching on my eyelids. We ducked and dived and hurled snowballs, we lay down and carved out snow angels then built our snowman taller than us until my hands were red and numb. You gave me your gloves even though you were just as cold.

I watched the sun rise through the window until every last snowflake had melted away and counted the seconds until the doorbell rung. We explored under rocks, examining beetles with tiny magnifying glasses as if we were on an expedition in the jungle and lay in the grass listening to the birds singing and the bees buzzing around the bright flowers. We made daisy chains for each other which we wore like crowns.

When the sunlight burned the colour from the grass and left the ground cracked and dry, we ran outside with our shorts and our sunhats, protesting against being slathered with sun cream. Then we forgot time giggling and building castles in the sandpit until my mother appeared at the back door tapping her watch.

It was there as she led me down the street to the biggest building I’d ever seen. Maybe I didn’t even notice. Maybe I had just grown used to it following, like an extension to my shadow.

I wasn’t scared to go because I knew you would be there and every day we learnt to spell and write and add and every lunch time we unzipped our lunchboxes and ate side by side. We played together on the field or the playground or in the classroom. You told off the kids who laughed at me or called me names and I did the same for you. We lived in our own little world until the bell rang to cut the day short. Our parents came to collect us and I sped up as it followed us home but it always matched our pace, I couldn’t shake it off.

Even when we moved to secondary school, it trailed me between classes and the longer walk home left my adrenaline pumping but nobody else seemed to notice so I pretended I didn’t either. Then everybody went their separate ways but we stayed where we had always been: together.

Your boss grew stricter and stricter, your hours longer. Snow fell but there was no time to enjoy it, it only brought cold. Another bill we couldn’t pay. The nights stretched on forever and the darkness seeped into every corner until I was afraid to move from my bed in case it was there. Because I knew it was. The bags under your eyes told me it still followed you too. But we never spoke of it.

It was strange to go back to that school. The same place I had spent so many happy days, full of innocent, naive hope. To wave goodbye and this time be left on the other side of the door, to have to go back to a house suddenly devoid of sound and life without children’s laughter or your voice. And once again be waiting for the minute hand which never seemed to move.

You left the office for the last time with the sun in your eyes. You threw your rigid suit into the back of closet and promised you would never be seen in it again until the day you died.

We lay side by side in deck chairs, watching the flowers we planted grow, the butterflies flitting amongst the bright colours. The trees had grown from saplings into grand oaks, their leaves regenerating, relentlessly a vivid green, shifting to orange then cascading in a red torrent, like a traffic light, every year as if by clockwork.

Bedrooms in our house fell into disuse one by one, only occupied during the all too infrequent visit. But there was warmth in our words and the laughter that painted our walls.

We watched our kids’ kids and their friends running around in their welly boots, red with ladybird faces and dancing antennae. We laughed along and helped while they built snowmen taller than them. Once the sun thawed the grass, they brought us daisies and you decorated my grey hair.

Then I wished I could stop the second hand from ticking as it raced around the clock face. I tried to ignore it but with every passing day, with every grey hair or wrinkle in my skin, it moved closer. Its rhythmic breath rattled in my ear, speeding up, turning time faster and faster.

We couldn’t jump in puddles or even go outside in the snow. We had no one to berate us with sun cream. But we still wore our war paint, even if it couldn’t be seen. Our hands became shaky with age but you still smoothed my hair and gave me your gloves when it was cold. You still made me feel as if I were wearing a crown.

We took our last steps. We laughed and we cried and then we lay side by side, with our children gathered together.

We had spent out whole lives being chased until we realised we didn’t need to run anymore.

Until our clock stopped ticking. 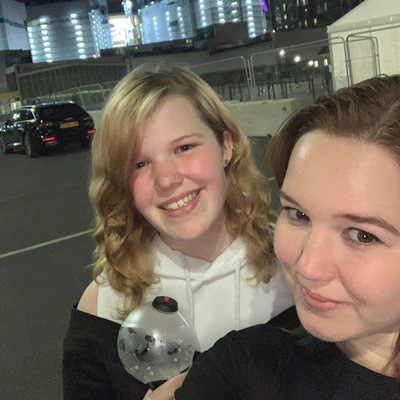